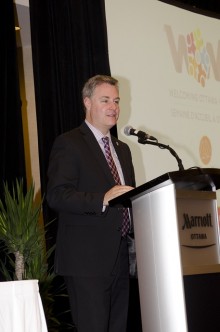 The 3rd Biannual Ottawa Immigration Forum was opened by the Deputy Mayor of Ottawa, Councillor Mark Taylor, who represented Mayor Jim Watson, who could not attend the Forum.

In his speech, Councillor Mark Taylor stressed the importance of immigration for Ottawa’s sustainability, economic prosperity, and cultural vitality. He reinforced City of Ottawa’s continued commitment to the goals of the Ottawa Immigration Strategy (OIS) and the key leadership role the City has taken in the implementation of the OIS.

In a written message addressed to Forum hosts and participants, Mayor Jim Watson reflected on the role of the Ottawa Immigration Forum as a valuable opportunity for stakeholders from multiple sectors to celebrate Ottawa’s progress on the goals of the Ottawa Immigration Strategy, and to share ideas and insights on how we can work together to remove barriers that impede the integration of immigrants into the Ottawa community.

“The wealth of resources and intellectual capital brought together at the Forum are a testament to Ottawa’s commitment to support the successful integration of immigrants, and to OLIP’s effectiveness as a vehicle for channeling and strengthening community capacity to attract and integrate immigrants” continued the Mayor of Ottawa in his written statement.