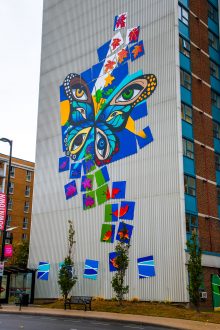 As you drive or walk along the far eastern part of Rideau Street or cross the Cummings Bridge between Lowertown and Vanier, it is hard not to notice the magnificent mural that adorns the south wall of an Ottawa Community Housing (OCH) building at 215 Wurtemburg Street. Transformation:  The Welcoming Ottawa Mural was officially unveiled at a ceremony on November 3.

Outdoor murals can breathe life and character into the neighbourhoods of cities and often build community pride.  What makes this stunning mural even more exceptional is the story behind it.

“This mural is more than just a piece of art,” says Claudia Salguero, the Colombian-Canadian artist who led the project that brought together 64 volunteers from across the city to paint and varnish each of the 68 four by four pieces of aluminum that were assembled to form Ottawa’s largest mural. “It represents all of our voices, delivering a strong message about togetherness, trust and belonging. This message is especially important in these trying times when often you hear about divisiveness.”

This mural was inspired by Welcoming Ottawa Week, an annual series of events that conveys the city’s genuine hospitality to and appreciation of newcomers from all over the world who join our community every year and then become us. By representing Welcoming Ottawa Week year round, this mural is a reminder that immigration and our diversity build a stronger and more vibrant Ottawa.

The concept of the mural, which includes a butterfly with wings made out of eyes represented in different colours, came about through many brainstorming sessions across the city, hosted by Claudia with residents from all walks of life.

The volunteers involved in painting and varnishing the mural’s pieces originally come  32 countries. The mural development also benefitted from a special participation by Algonquin artists. 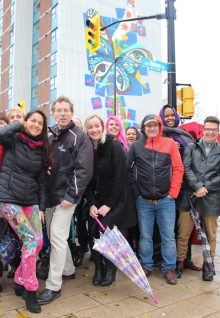 The mural was created as a result of 147 volunteer hours and 49 painting sessions in three locations. OCH and its tenants are proud to provide a home for the mural. One such tenant, Barbara Fosi said that being part of the mural project was transformative. “I’ve been reclusive for about 10 years, but was involved in the arts community many years ago. When I heard about this project and met Claudia I said I’m going for this. People need to have a better understanding of people from other countries because quite often our pre-conceived ideas aren’t correct.”

Barbara also tells the story of how when a tenant got off the bus at a nearby stop, she looked up at the mural and said with tears in her eyes that the butterflies are about transformation and that she could identify with that image in her own evolution.

“It’s an honour for OCH to be able to showcase this project, as it will be a point of pride for tenants, for many years to come, adds Stéphane Giguère, Chief Executive Officer, OCHC.  “The mural concept was the result of a very inclusive and collaborative process. The product reflects the diversity of our city and OCH communities. ”

Another community painter, Charlotte Aki Stevens, a member of the Algonquin Anishinabe Nation in Maniwaki, was inspired by the project’s transformative nature. “I was honoured to be part of this mural which has a lot of meaning and brought some many cultures together,” remarks Charlotte. “We need to do more art like this because it’s therapeutic and helps to break down barriers and bring people together.”

The youngest painter, Mathieu Rollin, 10 years of age, put it quite simply saying, “I really enjoyed being part of this painting project!”

Somerset Ward City Councillor and OCH Board Member Catherine McKenney, who participated in the unveiling ceremony, and represented Mathieu Fleury, City Councillor for Rideau-Vanier Ward, said that this mural reminds everyone that we are all part of the community. “It’s great to live in a city that gives buildings back to the people who live there.”

“Art has a big role to play in community development and newcomer integration.  It helps us communicate more effectively, at visceral and emotional levels, enabling human connections beyond social conditioning,” says Hindia Mohamoud, Director, OLIP.  “We are delighted to see the Transformation:  Welcoming Ottawa Week mural unveiled today, which was created by the community and for the community to celebrate Ottawa’s welcome of newcomers and our thriving diversity.”

At the unveiling, Hindia presented Claudia with a Welcoming Ottawa Ambassador award for successful community engagement and collaborative production of Transformation: The Welcoming Ottawa Mural.  “A special thanks goes to the lead artist, Claudia Salguero. Because of her creativity, tenacity, hard work and unique ability to bring so many volunteers together from across the city, this mural became a reality,” explains Hindia. 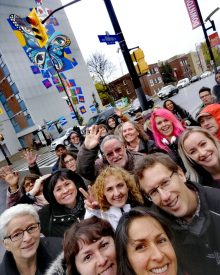 “The meaning of this project moves well beyond the neighbourhood where the mural lives, it’s about the idea of recognition; recognition of the values of hard work and determination that drive so many people to come from all parts of the world to join us every year” added Hindia. “Ottawa welcomes about 12,000 newcomers with dreams and a strong drive to succeed.  The stories of the thousands of new people – of men, women, and children who join our community every year and the many transformative impacts their efforts bring to Ottawa’s growth and vibrancy remains largely untold.  Thus Transformation – The Welcoming Ottawa Mural is a symbol of our collective recognition of newcomers’ contributions to our city,” concluded Hindia.

In closing, Claudia spoke of how – even if for some reason the mural wouldn’t been installed, by painting it together the most important part of the project had been achieved. That is, what was discovered along the way, that everyone can learn from each other, grow together and ultimately be stronger. “I feel thankful for the trust and support received in bringing 64 people together to create something bigger than all of us,” says Claudia.