Barrier to Employment for Immigrants

Canadian immigrants face a lot of barriers and challenges, not only in entering the labour market, but also in advancing their careers at the same pace as individuals born in Canada. At every level of education, immigrants tend to have higher unemployment rates compared to those born in Canada.  Similarly, previous research has also identified an earnings gap between international and Canadian students in the year following graduation from university. Given these known issues, there is a concern that the pandemic could have an outsized impact on the labour market outcomes of immigrants. As such, this article examines the employment rate of immigrants before and during the pandemic. However, due to the lack of publicly available labour market information (LMI) on diverse groups of immigrants (i.e., non-permanent residents), the analysis focuses only on landed immigrants.

Between April 2019 and April 2020, both groups experienced a sharp drop in employment. Employment among immigrants had fallen by 8% at the start of the pandemic compared to the prior year and fell 6% for Canadian-born workers. This employment loss translated to an employment rate of about 53% for landed immigrants and 55% for those born in Canada in the three months up to April 2020.

As the economy began to recover, landed immigrants and those born in Canada both returned to work. Between April 2020 to April 2021, employment recovered at a slower pace for immigrants than others. By April 2021, immigrants’ employment had returned to a rate equal to Canadian born individuals, at 59%. However, the twelve months of lower employment for immigrants means they are likely to suffer larger labour scarring effects, meaning longer-term consequences to career development due to extended periods of joblessness. 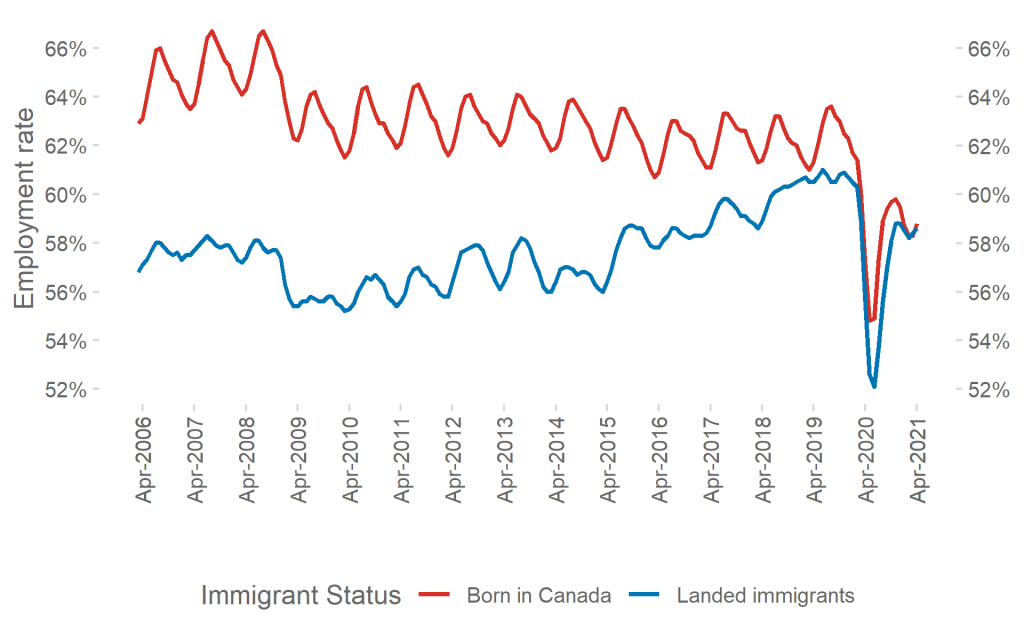 The Labour Market Information Council’s (LMIC) public opinion survey research identified the top employment barriers for unemployed recent immigrants. The lack of Canadian work experience was the top barrier, followed by lack of professional contacts and lack of Canadian education. Addressing these barriers by providing a variety of support programs could help improve the labour market outcomes of immigrants. LMIC will continue to work with the Ottawa Local Immigration Partnership (OLIP) group, and other stakeholders, to report on the labour market outcomes and employment barriers of immigrants and other under-represented groups.

Bolanle Alake-Apata is an Economist with Labour Market Information Council.