I’m not at home, I’m a refugee. I left my rights behind.

In the world today we need to ensure that no rights are ever left behind.

Thirty years ago Canada was awarded the Nansen Medal, sort of the equivalent of the Nobel Peace Prize in the refugee world. It was and remains the only time that the medal was awarded to an entire nation; as opposed to a remarkable activist or organization. At a time when the global refugee population is the highest since World War II – at 25 million, Canada has an opportunity to mark that anniversary and be a leader on the world stage again by promoting and ensuring that refugee rights are not left behind.

In September two major back to back meetings will be held in New York: a high-level meeting on refugees and migrants at the UN General Assembly followed by a Refugees Summit that is being convened by US President Obama with a growing number of co-hosts, including Canada.

There is an urgent need for these two high profile meetings. The anticipation and expectation for what has to be achieved is there. The unanswered questions are whether the imagination and ingenuity for solutions will be there; and whether the political will needed to make change happen will be generated.

What better way for Canada to mark the Nansen anniversary than to devote real diplomatic capital and political leadership in ensuring that something concrete and meaningful happens in September. 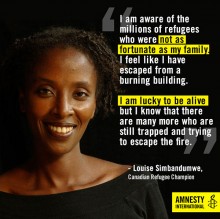 We need our leaders to become refugee champions. They must tackle the poisonous rhetoric about refugees that has taken hold everywhere. Whereas once this was mainly the fodder of tabloid papers, it has more recently gone mainstream; and it has become chillingly normal to hear political leaders regularly throw refugees under the proverbial bus if they think it will gain votes.

Every time a leader throws out terms and references which demonize refugees, or lets it slide when others do, support for refugees slips one more notch; and understanding of their needs and their rights further erodes.

Global leaders must champion refugee protection rather than pander to and fuel refugee xenophobia and bigotry.

We need to see meaningful, concrete commitments and action that is all about tackling the root causes of displacement; addressing the human rights violations that cause refugees to flee and then stand in the way of them returning home. This includes stemming the collapse of respect for fundamental norms of civilian protection such as the staggering numbers of hospitals and clinics now regularly bombed in conflict zones; taking strong action to protect the rights and ensure the equality of women and girls; tackling impunity for human rights violations; reigning in the arms trade; and ensuring companies are held accountable for their human rights impact.

The connection between the world community’s failure to advance these prevention agendas and bring major human rights crises to an end on the one hand and the inevitable consequences of massive internal displacement and refugee outflows on the other hand, is such an obvious one.

There is a critical need to strengthen and codify international solidarity. No state should go it alone – in responding to a mass influx of refugees, or in closing its doors to refugees. But that is increasingly the world we live in. If you are the frontline state, you are the one on the hook. If you are a faraway state, you get off easy. And if you are a state with sufficient resources for border control and visa checks or to deploy your military, you’ll find the way to keep refugees at bay.

The Global North does commit to resettling about 100,000 refugees out of the Global South every year. That is .4 of 1% of the global refugee population. And there are really only three countries – Canada, the United States and Australia – that have resettlement programs of any real size.

The UN says the world faces resettlement needs that are ten times beyond that level, around one million refugees. Even that is less than 5% of the global refugee population. Surely states can rise to that challenge.

While states premised refugee protection within a vision of international cooperation, they did nothing to require and enforce that cooperation through a legally binding framework that would ensure states work together to protect refugees rather than work singularly to avoid refugees.

The September meetings have to tackle this; and absolutely must lead to a shared understanding that protecting the rights of refugees is a collective responsibility.

By any measure one of our most essential human rights is the right to liberty and, with it, the right of freedom of movement. All over the world that is denied to refugees. Refugees are confined to camps, locked up in reception centers and denied papers that would allow them to move around freely. It is so commonplace that it has really come to be seen as the norm.

We must bring our refugee advocacy efforts within the UN human rights system and not separate the refugee world and the human rights world.

Put refugees themselves – their needs and fears, their experience and expertise, their capabilities and their determination – at the heart of refugee policy. Empowered and involved. Not sidelined and ignored.

Refugee protection decisions so often sideline and disempower refugees and, in doing so, disregard and weaken protection of their rights. We have to turn that around.

Today’s global refugee crisis is, in so many ways, an absolute assault on the human rights promise that “All human beings are born free and equal in dignity and rights. “

The world instead echoes the lament and belief that as a refugee, you leave your rights behind.

Amidst crisis, we face a crucial opportunity and certainly a critical imperative for change. Change which Canada is well-placed to lead in the months ahead. It lies in those five words: champions, prevention, solidarity, rights and empowerment.

And it means no rights left behind.