October 8, 2020
Ottawa Local Immigration Partnership (OLIP) is pleased to announce the appointment of Yasir Naqvi as the new Chair of OLIP. Yasir’s appointment was confirmed at the OLIP Council meeting held on October 7, 2020. Yasir succeeds Alex Munter who served as OLIP Chair since 2016.
Under Alex’s leadership, OLIP grew and accomplished a lot including the establishment of the OLIP Leadership Group and the Ottawa’s Syrian Refugees Resettlement Initiative engagements. “It’s been a joy to see these newest Ottawans become part of the fabric of our community and be embraced by their new friends and neighbours. It’s also been a privilege to bear witness to the countless organizations and individuals who so tirelessly work to make Ottawa a welcoming, inclusive and prosperous city.” 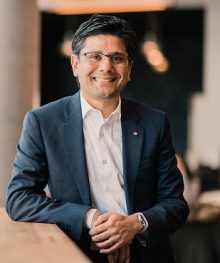 The new OLIP Chair, Yasir Naqvi, is the Chief Executive Officer of the Institute for Canadian Citizenship (ICC), Canada’s leading voice on citizenship and inclusion. Before joining the ICC, Mr. Naqvi served as a Member of the Provincial Parliament (MPP) for almost 11 years, representing a downtown, urban and diverse community in Ottawa, Ontario. In that time, he served as the Attorney General of Ontario, Government House Leader, the Minister of Labour, and the Minister of Community Safety and Correctional Services. Mr. Naqvi was also a member of the Treasury Board and Management Board of Cabinet.

Before being elected, Mr. Naqvi was the Associate Director and International Trade Counsel at the Centre for Trade Policy and Law (CTPL), a non-profit think-tank affiliated with Carleton University and the University of Ottawa. He also practiced international trade, competition, regulatory and administrative law with major law firms in Ottawa. In addition, he has served as a part-time professor at the University of Ottawa Faculty of Law, and a guest lecturer at Carleton University and Algonquin College.
Mr. Naqvi is recognized by his peers as a strong community leader and an involved resident of Ottawa. He has been cited as a “Community Builder” by United Way Ottawa and is listed as one of the “Top 50 People in the Capital” by Ottawa Life Magazine. In 2018, he was named on Canadian Lawyer’s “Top 25 Most Influential” list for advancing technological modernization in Ontario’s justice system. Most recently, Mr. Naqvi received the Lincoln Alexander Award by the Law Society of Ontario.
“I am thrilled to take on the role of Chair as we continue to build a better community. Given the moment in time, it is even more important that we collaborate, plan and work in partnership for the successful integration of immigrants in Ottawa,” Yasir Naqvi.
As part of the OLIP Chair’s mandate, Yasir will be presiding over OLIP’ governance process and collaborative leadership and engagement across sectors focused on improving settlement and integration of immigrants. “We are excited to welcome Yasir Naqvi as the new chair of OLIP. Yasir’s leadership and connections with some parts of our community will no doubt made a big difference in our Partnership’s on-going community-based planning,” OLIP Director Hindia Mohamoud.