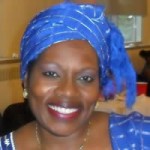 A translator by trade, Kenyan-born Sarah Onyango is a well-known fixture on Ottawa’s community television and radio scene. She hosts the monthly African cultural program Fontonfrom, on Rogers TV Cable 22 – Ottawa as well as the weekly radio programs, Black on Black and Afrika Revisited on CHUO 89.1FM (University of Ottawa community radio). She has also written articles for The Spectrum, Ottawa’s English-language, Black monthly community newspaper.

A tireless promoter of African and Caribbean culture and activities, Sarah has for many years been actively involved in public relations work for various African and Caribbean diplomatic missions as well as numerous community organizations such as Black History Ottawa, Fête Caribe, DreamKEEPERS, the Jamaican (Ottawa) Community Association, and the United Way. She has acted as Master of ceremonies for various high profile events including the 10th anniversary of South  Africa’s  post-apartheid democracy (2004), 25th anniversary of the Organization of Eastern Caribbean States (2006), and the African Union Day gala (2006-2012), as well as galas and forums by community organizations such as OCISO.