In 2004, UNESCO launched the International Coalition of Cities against Racism which consists of cities interested in sharing their experiences to improve their policies against racism, discrimination, exclusion and intolerance. One year later, the Canadian Commission for UNESCO launched the Canadian Coalition of Municipalities Against Racism and Discrimination (CCMARD) aimed at broadening and strengthening our society’s ability to protect and promote human rights through coordination and shared responsibility among local governments, civil society organizations and other democratic institutions. Currently, 54 municipalities in nine provinces and one territory are members of CCMARD.  The City of Ottawa joined CCMARD in April of 2011

By joining the Coalition, the City of Ottawa reiterates its commitment to ending racism and discrimination, and ensuring equitable and inclusive services for all its residents. The City of Ottawa’s participation is especially important as the capital city of a country that has adopted values of multiculturalism and diversity.

CCMARD has developed the “Toolkit for Municipalities, Organizations and Citizens” providing practical information to support the work of municipalities and their partners in strengthening their local initiatives and policies against racism and discrimination.

For more information: Canadian Coalition of Municipalities Against Racism and Discrimination 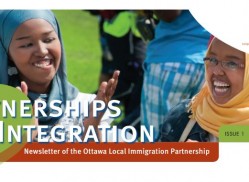 Welcome to the 1st issue of the Partnerships for Integration (PIN) Newsletter. Here we provide stories from across the community highlighting the progress towards the five sectoral areas of the Ottawa Immigration Strategy – Economic Integration, Health & Wellbeing, Language, Education, and Settlement & Institutional Capacity Development. We feature Ottawa as a home to Integration Innovations showcasing Ottawa-born best practices that have…